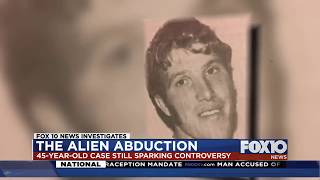 There is a history of alien abduction cases, which describes the claims made by individuals who claim they have been abducted by aliens. These stories first came to prominence during the 1950s and 1960s, although some researchers believe that such tales have a much longer history. Some of the common myths surrounding alien abduction are discussed below.

Psychopathology is indicated in some alien abduction cases

While some cases of alien abduction are hoaxes, some are genuine and may indicate psychopathology. Regardless, the experience of being abducted is a real and powerful psychological experience, with real consequences for a person’s mental health. People who experience these experiences may experience real fear and an emotional response similar to PTSD.

A common thread in many cases of alien abduction is a high level of fantasy and false memory. The occurrence of false memories is often associated with post-traumatic stress, pathological personality traits, and obsessive abduction beliefs. In addition, some of these individuals may also experience sleep disturbances, dissociative disorders, and eccentric or psychotic personality profiles.

Some abduction stories also feature forced medical examinations and tours of alien craft. In addition, abductees may experience a “mystical experience” during which they feel one with God or the universe or their abductors. However, this experience is a one-time experience, and the abductees rarely scrutinize the causes of their feelings. Despite this, they are left to cope with the psychological, physical, and social consequences of their experience.

The therapists who offer therapeutic help to alien abduction victims are not helping people get any closer to an understanding of the phenomenon. They are not helping them to understand it or to make sense of it. Instead, they are leaving them vulnerable to rape and additional abductions.

According to the UFO literature, an average of four to five percent of abduction reports have errors. These errors often appear when the abductors fail to return the captive to the same location or place or put their clothes on backwards. UFO researcher Budd Hopkins once joked that “Murphy’s Law” was being applied to the universe.

Although the prevalence of alien abduction beliefs in alien abduction reports is difficult to estimate, it is important to note that the stories and evidence of abductions often mirror one another. These stories often feature similar events and characters, which are reinforced by the popular media images of aliens. These stories also offer hope for those who feel that life has meaning beyond our earthly existence. The rise of globalization threatens traditional faith, but it does not discredit the stories.

The most famous alien abductee, Whitley Strieber, describes a similar experience, though her story differs from other abduction accounts. In this account, the aliens are not motivated by sexual molestation or semen theft, but rather by a desire to have a relationship with humans. Strieber’s story has been the most widely publicized and widely studied of all abduction stories. It was also turned into a movie in 1990.

The prevalence of alien abduction beliefs is increasing steadily ever since the emergence of modern alien research. In 2015, a survey conducted in Western societies suggested that the number of people who believe in alien abductions had reached 50 percent. This makes the idea of a secret military base quite plausible.

While it is difficult to define whether alien abduction stories are true or not, there are several factors that may help explain the prevalence of these stories. Firstly, the majority of abduction stories involve aliens harvesting reproductive cells from humans. In addition, some stories describe the aliens capturing only selected humans.

According to a study conducted by Richard McNally and colleagues, abductees reported experiences that are similar to medical and surgical procedures. Some of them even reported having their eggs and sperm harvested for breeding purposes. They also claimed that they had direct sexual contact with aliens.

In the 1960s, two cases of alleged alien abduction sparked the popular interest in the phenomenon. The Betty and Barney Hill abduction case from rural New Hampshire became a famous trope codifier, spawning a new genre of stories. Despite the lack of evidence, the couple continued to insist that they were abducted and returned to Earth after a few days. The story was later made into a movie, Fire in the Sky.

There are many similarities between the alien abduction story and the narrative of Indian captivity. For instance, Derounian-Stodola (1998) lists the alien abduction story in his list of captivity narratives. Likewise, Sturma (2002, 2005) points out the similarities between the two stories. Specifically, both Sturma and Barbeito (2005) focus on the trope of body invasion.

Another common trope of alien abduction cases is the use of scientific language in the stories. The author highlights the connection between historical American Indian captivity narratives and abduction accounts, focusing on the resonance between these stories and UFO abduction accounts. He suggests that the idea of the uncanny is a common tool for thinking through American ambivalence about the legacy of empire.

There are several ways in which the UFO discourse performs these mimetic amalgamations. The first is that it evokes a sense of urgency, even while evoking a certain lack of specificity. The second is that it plays on an overdetermined sense of desire. It provides an insight into other contingent American desires, such as redemption, innocence, and guilt.