Home Product Reviews Out of Body Experiences and Sleep Paralysis 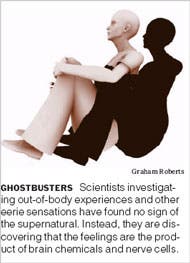 An out of body experience, or OBE, is a phenomenon where an individual has an experience of seeing his or her second self. Often attributed to a pathological condition, it is also sometimes referred to as autoscopy. There are several possible explanations for OBE. Some of them include sensory deprivation, lack of oxygen to the brain, and dissociative identity disorder.

Many people have reported having an out of body experience (OBE) and reporting seeing or hearing things outside of their body. These experiences have occurred during a variety of experiences, from cardiac arrest to surgical procedures. Although these stories have been used as evidence of life after death, there is no scientific proof to back them up. However, a 2014 study looked at whether veridical perception can be an explanation for OBEs.

The results of the study indicate that nonlocal consciousness is possible and may even be a cause of many OBEs. Some researchers believe that this is a result of damage to the temporal lobe. Some people who claim to have an OBE do not have any signs of neurological damage. While these patients’ experiences may not be symptomatic, it is still a good idea to seek medical attention for your experience.

In the 1920s, paranormal researchers became more interested in OBE. They began mesmerizing sensitives by asking them to project a ‘double’ into a nearby location. They also asked them to perform actions that would make the ‘double’ appear to leave the body. Eventually, they would show photographs of the ‘double’ at the location they manipulated.

The quality of the evidence for OBEs could be improved if there is more veridical evidence. A study conducted at a hospital found that some subjects had full visual perception during their experiences. However, further studies are necessary before claiming that this evidence is conclusive.

One of the ways that some people experience out of body experiences is through sensory deprivation. This type of isolation allows the brain to focus on inner levels. This technique became popular during the 1960s and 1970s. It was first invented by John C. Lilly in 1954. It remains one of the most common forms of sensory deprivation.

Studies of the brain have shown that sensory experience is important for normal brain development. Researchers have also demonstrated that it strengthens synaptic connections when pre and postsynaptic neurons are active together. They call this phenomenon coactivation. However, it is not a universal principle.

Most people have experienced an out-of-body experience at least once in their lives. This experience can be challenging and fascinating as it involves a sense of identity that is not located within the physical body. Several medical conditions may lead to a dissociative episode, in which the mind is completely separated from the body.

Other causes of out of body experiences include sensory deprivation, drug use, and trauma. However, some people experience them without any reason at all. These individuals may be predisposed to them. However, identifying what causes them has proven a challenge.

An out-of-body experience, or OBE, can occur for a variety of reasons. In some cases, brain cells die because of lack of oxygen, and in other cases, the brain releases neurochemicals that interfere with sensory processes. These experiences may be caused by trauma and physical stress.

While the brain represents only 2% of the body’s weight, it uses about 20% of the body’s oxygen supply. Without oxygen, brain cells cannot metabolize glucose, which is the fuel that powers conscious and unconscious functions. Without enough oxygen, brain cells can’t use glucose for energy, and if the brain doesn’t get enough, brain cells will die. This is known as cerebral hypoxia, and can be caused by a variety of causes, including head injury, substance use disorder, carbon monoxide poisoning, smoke inhalation, and a number of others.

Out of body experiences are hallucinatory visual experiences in which a person perceives his or her physical body in another location. These experiences have been linked to many mental disorders and conditions, including substance abuse and severe emotional states. They are also reported in people suffering from dissociative identity disorder. In one case, a 15-year-old male patient described floating outside his body and seeing his own body from a third person perspective.

The risk factors for developing dissociative identity disorder (DID) include childhood abuse, lack of nurturing resources, and the development of coping strategies that involve splitting one’s identity into several separate ones. Women are particularly at risk for developing this disorder because they experience physical and sexual abuse at a higher rate than men.

The condition is uncommon, but can lead to a traumatic childhood or the loss of memory. Psychiatrists may refer to it as “depersonalization,” a state of feeling disconnected from one’s life. People with this disorder often do not recognize themselves in their alters and do not exhibit much emotion.

If you or someone you know has these symptoms, you should talk to a professional about the diagnosis and what you can do to help. Often, the best way to help a person with dissociative disorders is to listen. Avoid giving solutions and judging them.

Many people have had out of body experiences and report feeling a sense of paralysis while they’re asleep. This can be an unnerving experience, and can lead to an escalating fear cycle. Fortunately, there are ways to deal with sleep paralysis so that you can have more peaceful, stress-free nights. Dispelling the myth surrounding sleep paralysis is a key first step to dealing with the experience. This means dispelling misunderstandings about the phenomenon and spreading scientific knowledge.

REM sleep paralysis refers to the inability to perform voluntary movements during sleep. It is considered a sleep disorder and is commonly associated with dreaming. A person experiencing sleep paralysis is still conscious, but there are some physical difficulties, such as difficulty breathing. This symptom is unique to sleep paralysis, and is one of the most puzzling aspects of the condition.

Although sleep paralysis is associated with scary movies and stories, it can also lead to a thrilling altered state. A person experiencing this condition often experiences a shadowy “bedroom intruder”, usually a shadow in the dark who slowly approaches the victim’s bedroom. As a result, the victim’s sense of self is often distorted.

The brain’s temporal-parietal junction is believed to be involved in out of body experiences. This area is located behind the ears and may explain the sensation of being “out of sight” or “behind the ears.” Many people describe this sensation as part of their sleep paralysis experience.

While scientists have not uncovered a clear explanation for spontaneous or induced out of body experiences (OBEs), researchers do know that they are possible. Induced OBEs can occur after an intense physical effort or while asleep. People have reported seeing angels, reuniting with lost loved ones, or even seeing light. Some people even describe being able to touch the light after dying. These experiences have many common characteristics.

Researchers have induced out of body experiences in healthy volunteers using various techniques. For example, scientists at the Karolinska Institute in Stockholm have induced OBEs by having volunteers wear goggles that show the perspective of a camera placed behind them. The volunteers felt as though the camera was a few metres behind their bodies.

Out of body experiences may be caused by a deficit in multisensory integration at the temporoparietal junction. This hypothesis has been supported by electrophysiological studies of epilepsy patients and lesions in healthy volunteers. Functional neuroimaging techniques have also been used to observe brain regions in the pure state of disembodiment.

The onset of out of body experiences has long fascinated researchers. These experiences can help advance our understanding of the human body and self. They are common among 10% of the population and in several medical conditions. However, there are relatively few scientific investigations into them. Most of the time, these experiences happen spontaneously and last only for a few minutes.