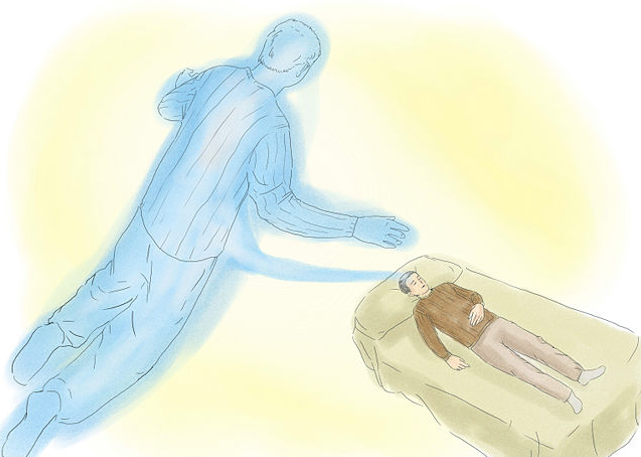 Out-of-body experiences (OBEs) are hallucinatory experiences that involve seeing your physical body in an external space. They are related to many conditions, including migraines, substance use, and severe emotional states. They can also occur in patients with dissociative identity disorder. One study, for instance, found that a 15-year-old male had a hallucination where he saw himself floating outside of his body and was observing his own body from a third-person perspective.

In the early twentieth century, paranormal researchers began taking interest in OBE. One study by Hector Durville enticed sensitive subjects to project a ‘double’ to a nearby location, causing them to move. He then photographed the presumed ‘double’ at the target location. Durville also conducted experiments involving the sensitives allowing them to see and feel things in the vicinity of the target location.

While these experiences may be true, some people claim that they are hallucinatory. Some people report having an OBE during a surgery, while others claim to see themselves floating. Some have also reported having “veridical perception” while undergoing a medical procedure. This claim has been used by proponents of the afterlife to show that people can float out of the body and experience the afterlife.

These experiences can also occur when people are undergoing a traumatic event or significant medical event. Scientists still don’t know exactly what causes them, but they can be triggered by a drug. Out-of-body experiences are still considered a scientific mystery, though, and there is much debate about whether they are hallucinatory. These experiences, although hallucinatory, have provided people with information that they otherwise wouldn’t have known.

They can be physical

Although OBEs are not considered paranormal, they do have some physical explanations. Scientists believe that they are the result of perturbed brain activity that can’t properly process sensory information. A study conducted by researchers from the University of Ottawa, Canada, analyzed the brain activity of a 24-year-old woman who had a history of leaving her body. This woman had claimed to leave her body at will, including when she was bored at preschool.

They can be spiritual

Whether out-of-body experiences (OBEs) can be spiritual remains an open question. One study found that approximately one in seven people reported experiencing an OBE at least once in their lifetime. Researchers collected data through a survey that included questions about the frequency of these experiences, their effects, and the need to contact a caregiver. Also, respondents were asked questions about their religious beliefs and their upbringing. The study included a total of 1118 respondents, and 407 of those participants reported having an OBE.

Out-of-body experiences can be physical or hallucinatory, or both. Some participants have reported having auditory and visual experiences during cardiac arrest. The experience is often accompanied by anxiety, depression, or confusion. Some participants are also concerned about repeating the experience. In addition, some believe that consciousness stays outside the body after an OBE. However, there is no evidence to support this idea.

These experiences are unusual and spiritual. They are distinct from normal sensory experiences, and they can be recognized and classified across cultures. They are not discrete events but more like syndromes. These experiences can be shaped by a variety of factors and may look completely different in different social worlds. For example, religious groups do not consider out-of-body experiences to be a spiritual experience.

Some researchers have attempted to quantify the presence of spirits in OBEs. Using the center of awareness – the mind or spirit – may better describe the experience. In these cases, the temporary loss of self may be viewed in a more positive light.

They can be induced by meditative practices

Induced out of body experiences (OBEs) can be triggered through sensory deprivation, such as during meditation. This kind of experience is phenomenologically similar to dissociative experiences. However, there are a number of differences between the two types of OBEs.

The nature of an OBE varies among individuals, but they typically involve being outside of the body and looking down. The experience is fascinating to neuroscientists, and understanding the physiological mechanisms that cause it can help us better understand how our brain works. The vestibular system, which keeps track of where the body is in space, is involved in out of body experiences, as do other senses.

Some OBEs may be related to a traumatic event or situation. For example, a person may experience a near-death experience with a sense of being outside the body. This may lead to dissociative symptoms, such as confusion over what has happened or even mental health problems. In addition, people who have experienced an OBE may be worried that it will happen again. Others might experience a persistent sense of being outside their bodies, such as a “light at the end of the tunnel” sensation.

Since the beginning of the twentieth century, there has been increased interest in OBE, but the evidence is not conclusive. Some researchers, such as Hector Durville, have tried to test the validity of such experiences by mesmerizing sensitives, causing them to project their ‘doubles’ to different locations nearby, and presenting photos of the presumed ‘doubles’ at the targets. But this method has been criticized as inaccurate due to human memory distortions and lack of sensory cues.

Although there is no scientific proof that consciousness leaves the body, a large number of people have reported having an OBE. The experience is also common among people with epilepsy and dissociative disorders. Nonetheless, experts say that there are other explanations for OBEs. Despite the unreliability of these reports, they have been used to convince people of life after death.

They can be alarming

The experience of being out of the body can be startling and enlightening. These experiences are a unique brain state and provide access to other dimensions beyond the physical. However, they can also be alarming. While many people who experience an out of body experience report seeing their own bodies, others report experiencing a sense of separation from their bodies.

Several people report experiencing strange sounds during their OBE. While some believe this is the result of sound not being able to travel to other astral planes, others believe this is just the brain trying to make sense of what’s going on. Some people even report feeling paralyzed during their experience.

The out of body experience is a common occurrence for people with vestibular disorders. It can occur at any time, and it can occur as a result of a variety of conditions. In some cases, the condition can be as simple as an infection of a nerve in the inner ear or an underlying condition.