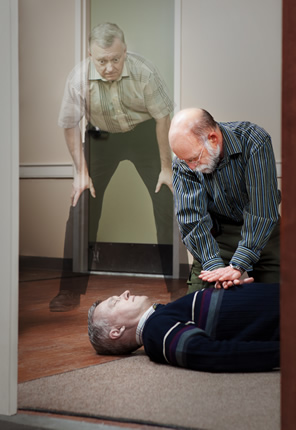 Out of body experiences (also called autoscopy) are experiences when we have an awareness of a different self than that of our own. These experiences may be triggered by several factors, such as meditative practices, neurological factors, and Veridical perception. These factors are discussed in this article.

Veridical perception has become a controversial theory for out-of-body experiences. It claims that a person who has experienced a NDE can see and experience things outside of his or her body. This concept has its origins in the 1977 story of migrant worker, “Maria,” who had an NDE while undergoing resuscitation in a Seattle hospital. During the experience, she reportedly saw a tennis shoe on the window ledge of her third-floor hospital room. She was so moved that she asked her social worker to go check the shoe, which he did.

While there is no scientific evidence to support these experiences, some people report specific details during a surgery or while clinically dead. These stories have gained traction among people who believe in life after death. Although there are no rigorous studies to support this claim, many people use these experiences as evidence. One recent study examined the validity of veridical perception during cardiac arrest and found that some of the patients reported complete visual perception.

Another study is exploring the question of self-location when out of the body. It also addresses the question of whether or not people believe that they own a body when out of body. The study uses virtual reality technology and real-time video feeds to alter a participant’s perspective and view of a different location. When the experimenter touches the participant’s chest with a small rod, the participant witnesses the same rod moving towards the field of view of the cameras.

Astral projection is a technique used to leave the physical body and experience a completely different state of consciousness. Although many people describe these experiences, little research has been done to study this technique. However, there are a few simple steps you can take to protect yourself from harm. First, use a protective light such as white light.

The main concept behind astral projection is that every living being consists of several layers of being that exist in parallel on different vibrational levels. This concept can be traced back as far as 3,000 or 5,000 years ago, when ancient Egyptians believed in the existence of an “astral body” separate from the physical body. The ancient Egyptians even had the concept of an eight-layered soul called the “Ba” – the closest to the Western concept of the soul.

Using fMRI technology, researchers at the University of Ottawa School of Psychology studied a woman who claimed to astral project. They guided her into astral projections and then asked her to move her non-physical body in different ways. They found that the movement was correlated with different regions of the brain.

Out of body experiences (OBEs) are spontaneous experiences where you experience yourself outside the body. They are often challenging and fascinating. During such experiences, you may wonder if you are really alive, or whether you are only a part of a material reality. To help you process this experience, there are meditative practices.

These practices involve activating different chakras in the body. For instance, the third eye chakra is related to the pineal gland, which is considered the “seat of the soul.” The pineal gland releases a substance called DMT, which is linked to spiritual experiences and hallucinations.

Other techniques include walking meditation, which involves slowing down your pace and not focusing on where you are going. You focus on your feet and legs, repeating an action word, and concentrating on sights, sounds, and smells. Another form of meditation involves prayer, which is widely practiced and found in most faith traditions.

Meditative practices are an effective way to enhance your experiences. The benefits of meditation include reducing stress and improving your health. Regardless of the type of meditation you use, it will help you become more aware of your surroundings and yourself. Meditation will improve your relationship with others, so you’ll feel more connected.

Out of body experiences (OBEs) can be challenging for the subject. They can be short or prolonged. Neurological evidence suggests that these experiences are related to an interference with the temporo-parietal junction. This region of the brain is important for integrating information from the external environment and the body.

Several neurological factors contribute to the likelihood of having an out of body experience. One of the most common causes is a malfunction of the vestibular system, which is part of the inner ear and connected to the temporoparietal junction. In other words, when the vestibular system fails, the brain is unable to get a sense of balance or spatial orientation. These experiences can be more common in patients with vestibular disorders than in healthy subjects.

Journaling as a powerful integration technique

Journaling is an effective tool to process out of body experiences. People with significant OBEs often find themselves questioning their identity and what their true nature is. Journaling, meditation, yoga, and other activities that ground the body can aid the process. By writing and reflecting about these experiences, we can set the stage for a successful integration.

Journaling is also an excellent tool for fostering emotional healing and growth. Researchers have also found that it helps to strengthen the immune system and reduces the risk of illness. Journaling has also been proven to help patients cope with trauma, and can help patients recover faster from injuries and illnesses. Furthermore, journaling improves memory, keeps the brain sharp, and increases working memory capacity.

If you’re suffering from frequent out of body experiences, you should talk to a doctor about treatment options. OBEs are often associated with depersonalization-derealization disorder, a disorder that causes a persistent feeling of being outside the body. OBEs may also be caused by a disorder known as sleep paralysis. This is a disorder that affects the REM sleep phase of the sleep cycle and often involves hallucinations and dissociative symptoms. In addition, OBEs are reported among people who have experienced a near-death experience.

Treatment for out-of-body experiences may include psychotherapy, which is particularly helpful in cases where the patient experiences dissociation from the body. A person with dissociation is often highly suggestible. In this case, an OBE may be a useful therapeutic metaphor, allowing the patient to look at complex separational processes.

What Are Out of Body Experiences?

The Tarot: An Introduction. Just Exactly How Do You Use These Cards?