In 1947, a rancher in Roswell New Mexico discovered debris in his sheep pasture outside of town. The official story at the time by the Air Force was that he found a crashed weather balloon. However, skepticism persisted as many questioned whether it was in fact a UFO piloted by extraterrestrials. Decades later the U.S. military indicated that the debris was actually from a top-secret atomic project. Still, the UFO theory has remained popular.

In a recent interview with NBC News, President Donald J. Trump revealed that he had heard some interesting information about Roswell, New Mexico. Roswell is considered by many to be the UFO capitol of the the United States, if not the world, due to a now well-known 1947 supposed UFO crash. Trump was, however, tight-lipped regarding the actual information that he had heard, offering only a small teaser instead. Trump also indicated that he would not reveal what he knows, even to his oldest child.

Trump indicated, “I won’t talk to you about what I know about it, but it’s very interesting.” His son, Don Jr. was also interviewed and asked whether or not the President would ever reveal more information about the Roswell incident.

Previously, the president in the past has been skepticald about the possibility of alien life: “People are saying they’re seeing UFOs. Do I believe it? Not particularly.”

When asked whether or not he might declassify the information someday, he responded, “Well, I’ll have to think about that one.” 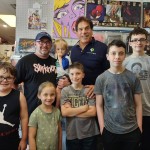